A psychology perspective: what makes Pokemon GO so popular?

Posted by Maja Gaspari in Psychology.

Pokémon GO, a free location mobile based game that was developed by Niantic for Android devices, has become a huge hit in the world of gaming. It was released in July 2016 and was downloaded by at least 15 million people in a week in the USA alone. After being introduced to EU consumers, the numbers got even higher.

After the release, Pokémon GO hit the social and news media. While some people are still excitedly playing the game, others wonder what made the game » which by utilizing GPS and camera, allows users to capture, fight, plus train virtual creatures by the name Pokémon« (1) so popular.

I will discuss few psychological factors that play an important role in the success of the game.

1. Pokémon as culture and nostalgia connected to it

Pokémons used to be popular in the ’90s and many children were in some way engaged in the phenomenon. They were watching the series, playing card games, video games, etc. The newly released Pokémon GO reminded these people of times when they were children, had no worries, enjoyed life and had a great time playing the game/watching the series. The game gave these people the chance to enjoy the phenomenon again and for some of them, the game fulfilled their childhood dreams of becoming Pokémon trainer themselves and »Catch them all« in real life.

Emotions are important in consumer behavior and nostalgia in this sense plays a major role (2). But what is actually nostalgia? The term endured a negative reputation, as people came to believe it means an unhealthy preoccupation with one´s past and is because of that less capable to deal with the future. The recent research shows, that nostalgia » strengthens approach orientation, raises optimism, evokes inspiration, boosts creativity, and kindles prosociality « (3).

If the game really influences all these feelings, it is no wonder that it became a hit and that people will likely continue playing.

2. Social Aspect of the Game

An important part of the game’s success is the social aspect of the game. What I mean by that is the construction of the game that forces a person to walk around the neighborhood or city in order to collect Pokéballs, Pokémons etc. While playing, the person easily meets people and starts the conversation as they share one (obvious) interest. It can be a fun activity for a group of friends and what’s more, sometimes even complete strangers form groups and continue playing the game together.

There are many people across the world who play the game. We can notice that by just looking through the window and even more, by looking at different forums, websites, and social media. Since the release of Pokémon GO, the information about the game have gone viral. There is a large number of individuals, who share their experience on the game, as well as a huge number of forums and groups where people are chatting about their experience. Through all that happening and chatting, an individual feels he/she is a part of a large community. The feeling of belongingness is a core human need (5, 6) and the community that arose because of the game, fulfills that need. Even for those who have difficulties making friends.

From that follows; the more people will talk about it and the more the individual will see other people playing, the more likely it is he/she will continue playing himself.

Because of that, the number of players Pokémon GO players reached the critical mass, which led to the »tipping point«, a point in time when a group—or a large number of group members—rapidly and dramatically changed its behaviour by adopting a previously rare practice (which is, playing the game Pokémon GO) (8).

Developers of games put a lot of effort and knowledge in developing games that will invite people to play and maximize their time spend in the game. What makes Pokémon GO interesting and in a way addictive, are three characteristics.

4.1. There is always something going on.

The game is constructed in a way, that you can basically find Pokémons, Pokéstops to collect Pokéballs etc., every minute. There is no automatic »time-out« (except when the game crashes) or »game-over«, which would give a person a chance to stop the game more easily. The game actually does not really give you a chance to stop playing, unless you consciously turn the game off yourself. Which can be difficult. Especially as you might be getting that special Pokémon, you have been searching for quite a while, just around the next corner. It might sound funny, but such mentality actually resembles the one in gambling addiction. As there has been some time since the person caught his/hers last rare Pokémon (or won the gamble), it is » about time I catch another one. Maybe, just maybe it is just around the next corner, or street, or…«. And the game continues.

The game is designed in such way that if you want to improve, you have to play more and more, Pokémons are harder to find and to catch and what is more, you can only improve if you have the app turned on. As already mentioned, this makes it harder to stop playing and especially people who are prone to extensive internet usage, might develop internet (smartphone) dependence.

4.2. The game allows you to improve very fast.

An important feature of all games is that individuals can improve and progress very fast. That is contrary to real life, where it takes you weeks, moths and sometimes even years, to improve. And for which you need a high amount of motivation, patience, and hard work. In case of lower self-esteem, the games as Pokémon GO enable those individuals to improve fast and consequently feel good about themselves. When we feel great while doing something, the chances of giving up the behavior are lower.

There has been some debate on whether the video games can really improve certain skills. The research indicates, that while balanced usage of internet video games can actually improve certain cognitive skills (attention, planning and strategic thinking etc.), the extensive usage lowers them (9). The reason lies in the fact, that excessive playing affects the structures in prefrontal lobe, responsible for rational thinking, planning, problem-solving, concentration etc. In children and adolescents in particular.

Last but not least, the game can be played basically everywhere. All a person needs is a smartphone and GPS. The majority of people has both and the era of all kinds of applications made this game be understood and mastered in no time. Even though the technology of »augmented reality« exists for quite some time, it is since the Pokémon GO that everyone is aware of how an artificial digital world can be mapped onto the real physical world (4). This is definitely an important feature which makes the game even more intriguing and compelling. It is namely much more fun and special pleasure to catch Pokémons in your own neighborhood or city, than an entirely virtual world.

Psychologist from Oxford Internet Institute, Andrew Przybylski, summarized all the mentioned factors in one sentence (10):

“The only way to deliver fun is to have players feel confident, give them a sense of exploration and connect them socially to others – on those three very important counts, the game (Pokémon GO) looks like it’s succeeded.” 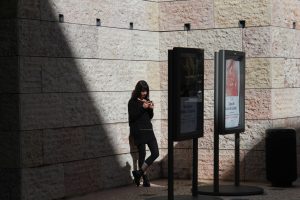 Pros and cons of Pokémon GO

There have been many discussions of whether the game has made a good or a bit worse impact on the society.

Pokémon GO turned out to have some rather good consequences.

We are in a great way a sitting generation. Even children stay indoors (and spend their free time on the computer or any other digital device) instead of going out. The game has stimulated people (including video game addicts) to spend their free time outdoors with other people. Through that they are more physically active than usual, which is definitely a good consequence.

The game makes meeting new people much easier. The issue for many people is how to start a conversation with an unknown person. Having the same interest (for example the game) makes it easier for shy people to engage in conversation.

Moreover, some people have even been announcing, how the game helped them with their mental health problems (mostly depression and anxiety). The professionals in the field of mental health agree that it is not the game that would explicitly improve the mood. The positive effect is due to exercise, which has long since been known as an important aspect of treating depression, anxiety or other mental disorder. The game gets these individuals out of their rooms. As physical exercise affects the body and works as an antidepressant, playing the game helps improve mood (1). The positive impact of the game is therefore the fact that it encourages these people to go out and do physical workout (walking).

While I was watching all the players across the city, I started questioning myself, about the quality of these social interactions. What observers see is, that despite walking in groups, people had their eyes focused on the screen, barely paying attention to their surroundings. That includes other people, which sometimes result in running into a stranger, a hole in the street, lake etc.

Furthermore, newly published article warns about »phubbing« (phone snubbing). The research indicates that momentary distraction by one´s cell phone (which might as well include Pokémon GO), while interacting with important others (friends, partner), can result in lower satisfaction with the relationship of these people (11).

Momentary distraction does not only affect relationships but might also affect our concentration, attention, and other cognitive functioning. The term “multitasking” has been set under consideration. New research namely shows that multitasking is not really productive and that we can only multitask if the activities we do simultaneously, demand different parts of our brain. One of the many types of research done in the field was conducted at Stanford University. It found that multitasking is less productive than doing a single thing at a time. People who are regularly bombarded with several streams of electronic information (for example Pokémon GO) cannot pay attention, recall information, or switch from one job to another as well as those who complete one task at a time (12).

As we can see, the psychology behind the success of Pokémon GO is quite complex. The social aspect of the game and the sense of reality have definitely contributed to it. The technology is developing rapidly and will, in the near future, affect our everyday life to an even greater extent. The content (games etc.) is becoming more involving and instantly satisfies our deepest and most hidden needs. The million dollar question remains: will technology eventually become more interesting and satisfying than reality?

Maja Gaspari is a psychologist working in the field of internet addiction. She currently works at Logout, centre for digital addiction, where she helps people dealing with internet addiction through consultations and workshops.