Does Spending Money Make You Happy?

Posted by Andy Luttrell in Psychology.

You’ve probably heard that money can’t buy happiness. It also can’t buy you love. It also doesn’t grow on trees. Come to think of it, people are pretty insistent that money doesn’t do much at all… except make the world go ’round.

In general, there’s some truth to the idea that money and happiness are not inextricably linked. Although it’s true that people in poverty tend to be less happy than people who have more money, once your income affords you a reasonably comfortable life, having even more money usually doesn’t mean being even happier.

Nevertheless, people often think that more money = more happiness (with some notable exceptions) and that we can find satisfaction through buying the things we want most, but the enlightened among us are quick to correct this notion.

Indeed, research shows that the more materialistic people are, the less happy they are. They’re more likely to be depressed. They tend to have lower self-esteem. They have poorer relationships and are less willing to get involved in their communities. There are real downsides to our materialistic urges.

New research has started to show, however, that spending money can lead to happiness…but only if you spend wisely. That is, there are some types of spending that actually do make you feel better.

For example, several studies have shown that spending money on experiences (vs. products) can make us happier. In other words, being super materialistic and stocking up on fancy kitchen gadgets for yourself isn’t going to have the happiness payoff you’re looking for.[1] Putting that same amount of money toward an interesting trip or a night at the theatre could actually have such a payoff.

Other research has also shown that people do feel happier after spending money on other people. So finding an opportunity to spend a little money on someone else–buying them a snack from the vending machine, donating to charity, or paying for the coffee of the person behind you in line–might be a way to turn cash into happiness. 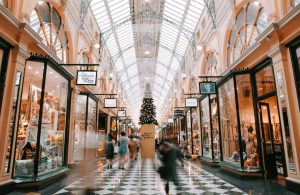 Of course, social psychologists learned a long time ago that there’s probably no such thing as a one-size-fits-all psychological theory of everyone. Just because things tend to be true about how human beings think and interact with the world, it doesn’t mean that humans aren’t messy and complicated.

This is especially true when it comes to happiness.

In other words, spending money in a way that fits your personality and values is what makes you happier.

In their first study, they were able to track people’s actual purchases with the help of a bank. They contacted tons[2] of members of a particular bank and asked if they’d mind looking through their recent purchases. They also asked them to fill out a short personality survey and to say how satisfied they were with their lives.

The bank’s system automatically categorized people’s purchases, and the researchers took those categories and figured out the personality of each one. Sounds weird, I know, but consumer psychologists have long been talking about product “personalities.” In this study, for example, a really extraverted spending category was going to bars and restaurants. A really conscientious spending category was computers and technology. A very agreeable spending category was giving to charity. You get the idea.

Across 625 people and 76,863 transactions, the researchers analyzed the spending habits of people with various personality types. Overall, they found that people tend to spend their money in ways that match their personalities.

But of course it’s far from a 100% match between personality and spending habits. However, when you break the numbers down a bit, you find that the more of a match there is between a person’s personality and how she spends her money, the happier she is overall. Once again, spending money in a way that fits your personality and values is what makes you happier.

In general, the science of happiness paints a mixed picture when it comes to the relationship between money and well-being. Having money is better than not having money, but having more money isn’t necessarily better. And spending money on other people is better than spending money on yourself but not if you don’t care about other people and even still, spending on yourself is only good if you spend it the right way.

If you were paying attention, though, you might have a few questions about that huge[3] bank transaction study. The main issue is that it’s totally correlational. That just means that the data can only tell you that personality-consistent spending patterns are associated with well-being, but they can’t tell you which caused which.

Maybe happier people know themselves better, so they’re smarter about their spending. If that’s the case, then we still don’t know about the causes of happiness. The researchers address this issue with a second study that instructed people to spend money in various ways to see if it affected their well-being.[4]

The other issue is that this might all be about how much money people have. In other words, the results could just mean that people who have the budget to spend their money on fun stuff (i.e., the stuff that they like) are the people who with higher well-being. By contrast, people who don’t have the means to spend a ton on fun stuff aren’t as happy. It’s worth noting that they controlled for people’s total income in their analyses, but even the authors raise this intriguing alternative explanation for their findings.

1. Nevertheless, I am convinced that a Vitamix blender will make me unimaginably happy.
2. 150,000
3. yuuge
4. Okay, detail-minded footnote time. What they did was have introverts and extraverts spend money either on a book or on a drink at the bar. For introverts, spending money on a book made them feel way better, and spending the money at the bar actually made them feel a little more negative than they usually do. Clear case of the personality-matching effect at work. For extraverts, though, spending money on a book and at the bar both increased their happiness, which isn’t a clear case of the personality matching effect. They explain this by suggesting that extraverted people just tend to be happier overall, regardless of what they do, but that’s not quite consistent with the benefits of personality-guided spending. We’ll need to see some more evidence before we make a call on that one, I think.

Andy Luttrell is a Social Psychologist and has recently finished his PhD. Now he’s continuing to conduct research in the area of attitudes and persuasion while teaching the world about psychology.