Sir Richard Branson, not really the  stereotype entrepreneur, however surely a man that has always been one of my role models. Richard is unique in his approach to new ideas and contributes in many innovative ventures. He started his first business at the age of sixteen, today this business has become the Virgin Group that comprises more then 400 companies.

“Business opportunities are like buses; there is always another one coming.”

Branson struggled with dyslexia from an early age which gave him a hard time studying. He later dropped out of school at the age of sixteen and started his first venture, a school magazine for students. The student magazine went pretty well by selling advertisements to local businesses. During this time he came up with the idea to begin a mail-order record company to fund his magazine efforts. This led to an expanding of his business by adding a record store in London that he was able to buy back in 1969. After 2 years of selling records and having a bit of experience, Branson decided to start his own recording studio. Virgin Records was born. His early entrepreneurial spirit didn’t stop there, in fact it only improved.

Over the next decades Virgin Records had an enormous growth and labeled big artists like Sex Pistols and even the Rolling Stones. As a result of the expansion of the record company he kept on starting with new businesses and developing new ideas. Many people didn’t believe in his concepts, however because of his determination he was able to make the ideas into reality. Now approximately 50 years later the Virgin Group holds many big companies, including airlines, radio stations and even an spaceflight company. Richard Branson, once a young boy that dropped out of school, having a lack of experience, yet one of the biggest business magnates in the world. He has been honoured for the “services to entrepreneurship” and knighted Sir, by Elizabeth II.

He says, his secret is bringing the right people together, doing what you love and just start. If he has a idea, he will figure out how to get there and won’t procrastinate. Not only in the corporative world Branson is someone that holds on to his ideas. If he has a plan to set a new world record or something similar, he will try it. 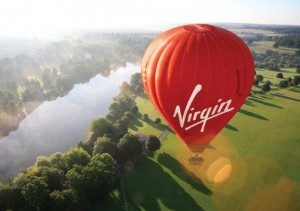 Over the past years, Branson has had his share in attempting new  world records. Below, a list of the world records he holds.

His words on how he started Virgin Airlines

“I was in my late twenties, so I had a business, but nobody knew who I was at the time. I was headed to the Virgin Islands and I had a very pretty girl waiting for me, so I was, umm, determined to get there on time.

At the airport, my final flight to the Virgin Islands was cancelled because of maintenance or something. It was the last flight out that night. I thought this was ridiculous, so I went and chartered a private airplane to take me to the Virgin Islands, which I did not have the money to do.

Then, I picked up a small blackboard, wrote “Virgin Airlines. $29.” on it, and went over to the group of people who had been on the flight that was cancelled. I sold tickets for the rest of the seats on the plane, used their money to pay for the chartered plane, and we all went to the Virgin Islands that night.” 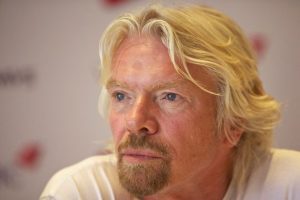 As one of the richest man in the UK he is worth 4.8 billion dollars.
He is able to buy whatever he wants but instead says, stuff, really is not what brings happiness.
Branson started his first charity on the age of 17 and,
today has supported over more then 30 charities & foundations.
Aside from that, Richard has promised to give away 3 billion to create a sustainable and healthy world for our next generations. Contribution not only helps others but also brings fulfillment. Perhaps, many other billionaires can learn from his determination to make the world more sustainable and livable in the long term future.

Branson, I believe is an inspiring man for a lot of new and young entrepreneurs. Perhaps because he is the example of a businessman that accomplished so much without even a college degree, perhaps because of his determination and unique approach. He also wrote several books to help aspiring entrepreneurs, where his recent book Everything I Know About Leadership The Virgin Way

teached me a lot about leadership.
Back in the days, Richard had the privilege to buy an island in the Caribbean ocean for a price I think many others would have done it. With the success he had back then Necker Island was being transformed into what it is today. It’s a place where people come together, conceive new ideas and relax. Below you’ll find a video where Branson tells you more about the island and gives you a good view on what kind of man he really is.